On June 28-29, 2018, the project will organize the workshop Shipyards as transforming workplaces: methods of grasping shop-floor experiences from below which will take place at the City Museum in Gdynia. Although our project carries „from below“ in its name, the term challenges us again and again. In this workshop, we want to pose the question if engineers and directors have their own „from-below“ perspective and how our research can explore technology changes, the spatiality of the shipyard and the dissolution of the milieu.

On the first day, the human geographer David Jordhus-Lier holds the keynote speech. Visitors are welcome.

This years Annual Convention of ASEEES (Boston, 6-9 December 2018) has the overarching theme of „Performance“. This provoked us to suggest a panel on the „Performance of Performance“. The panel was just acceptes, so project members Philipp Ther, Piotr Filipkowski, Ulf Brunnbauer and Andy Hodges will present fresh results of our project. Adrian Grama, post-doc at the University of Regensburg, will add a paper on Romanian experiences with new evaluations of economic performance. Katalin Miklossy from the Aleksantieri Institute in Helsinki will provide commentary, with Tanja Petrovic from Ljubljana chairing the whole thing. 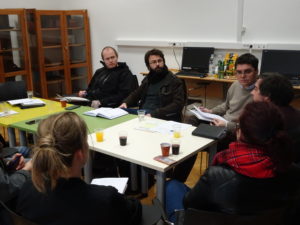 March 16, 2018, a unique experience for our project: to present it at the Faculty of Shipbuilding in Zagreb, thus engaging in a dialogue with the engineers and business people. We learnt a lot which we owe to Prof. Kalman Ziha, Prof. emerit. at the Faculty and Main Editor of the important industry journal „Brodogradnje“, who organized the event on short notice. 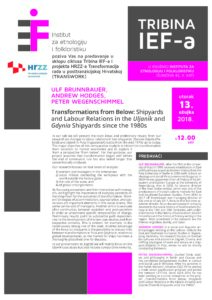 On March 13, 2018, we could present our project at the Institute for Ethnology and Folklore Studies in Zagreb. Apart from the useful feedback from the ethnologists working at the IEF, we were also exploring opportunities of cooperation with a project on post-socialist labor at the IEF.

On January 26, 2018, the IOS organizes the workshop „Management Practices in Transformation.
Interdisciplinary Insights from East Central Europe„, taking place in Regensburg. The workshop focuses on the role of the management in the transformation from state socialism to however we call the system that followed; and how management practices were not only changed but were essential instruments of establishing new social relations.

The workshop gathers economists and historians. Keynote speakers are Helena Schweiger from the ERBD and Jurij Fikfak from the University of Ljubljana.

On September 27, 2017, the project will organize the workshop „Firms in Late and Post-Socialism. State control, Management and the Shop‐floor in Transformation“, which will take place at the Philosophical Faculty of the University of Pula. Visitors are welcome.

The project will be presented on a panel at the forthcoming ASEES convention in Washington D.C.:

„Labor, Shipbuilding and the (Inter)National Economy: Adriatic and Baltic Case Studies in Comparison“

Brief Panel Description
The panel addresses the question, how business development and labor relations in East Central Europe’s 20th century were interrelated with politics of nation-building on the one hand, patterns of integration into global flows of capital on the other. We take the example of three emblematic shipyards: „Uljanik“ in Pula (Croatia) and two Polish shipyards, in Gdynia and Gdańsk. Maritime ship-building is a peculiar industry: it is usually characterized by a strong role of the state, regardless whether the economy is socialist or capitalist in nature. It is also exposed to particularly fierce global competition. Hence, the in-depth study of these case studies sheds fresh light on the ambiguous interconnections between nation state-driven economic strategies, the international division of labor, and the local position of industrial workers. One of the starting assumptions is that the researchers shipyards help to complicate conventional wisdom about the role of the state in socialist, and post-socialist economies.

Papers:
Philipp Ther/Piotr Filipkowski: „Neoliberal Reforms and the ‚Self-transformation‘ at the Shipyard in Gdynia“
Ulf Brunnbauer: „Between States and Political Systems: Labor in the Uljanik Shipyard (Pula, Croatia)“