The history of the shipyard in Gdynia dates back to 1922, when the private ship-repair enterprise was officially registered in the nearby town of Wejherowo. Gdynia, then still a village located at the short Polish Baltic shore, started expanding rapidly and a few years later became the most modern and fastest developing city of Poland – with the newly built, and the only, Polish high sea port. The shipyard was thought and built as a Polish competitor for the ship industry of the Free (but practically German) City of Danzig. Due to constant financial problems, the worldwide economic crisis, and harsh German competition however, these plans could be fulfilled only to very limited extend before the outbreak of the Second World War. During the war, the shipyard in Gdynia – a city directly incorporated to the Third Reich – served entirely the military needs of national-socialist Germany.

Immediately after the end of the Second World War, the completely destroyed infrastructure of Gdynia’s shipyard and harbor was taken over by the Polish state, which started their reconstruction and reuse. Next to Gdańsk and Szczecin, Gdynia quickly became the key center of the state owned shipbuilding industry in Poland. Its economic, social and political importance was accelerating continuously. The first ship built by the yard (which was given the name “Paris Commune Shipyard”) was a 820 dwt general cargo ship named “Melitopol” produced in 1952 for the Soviet Union – the main customer of the Polish Ship industry until 1989.

The rising demand for large vessels resulted in the development of the enterprise. A modern hull production centre with the first dry dock was built in Gdynia in 1959-1963. The shipbuilding boom began for Gdynia. At the beginning of the 1970s, after the construction of 20.000 dwt tankers and 23.000 dwt bulk carriers the size of ships built there was doubled. The multipurpose bulk carrier “Marshal Budionny” was two times larger than any vessel hitherto built by the Polish shipbuilding industry. Specialization in large vessels, the length of which could reach 250 m, created the need for mechanizing and automating a part of the shipbuilding process. In 1976 the second dry dock able to accommodate vessels up to 400.000 dwt was delivered. Gdynia shipyard became the unquestionable leader of Polish ship production – constructing the biggest, most modern, and internationally recognized highest quality vessels of various types. 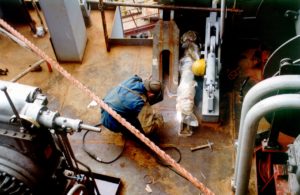 Next to these technological and economic successes, the Gdynia Shipyard was an arena of the most important workers‘ protest in Poland that took place between 1970 and 1980 and which developed into the mass social movement of “Solidarność”.

The political and economic break of 1989 caused harsh turbulence for the entire Polish ship industry. Still, the Shipyard in Gdynia managed to survive this dramatic period – mostly thanks to its strong international position built in the previous decade(s). By changing the legal frameworks of its activities and adapting to global market competition – also through employment reductions – the Shipyard in Gdynia was overcoming reoccurring financial crises and regaining the company standing, stability in cash-flow, and capital availability. New contracts with strong worldwide ship owners for modern, high quality vessels secured the company’s position. Nevertheless, rapidly rising steel prices and strong competition by Asian shipbuilders led to such deep financial problems in 2002-2003 that the state – still the main owner – decided to restructure and subsidize the company. After Poland’s entrance to the European Union in 2004, this support policy was considered unauthorized public aid. As a consequence, the Gdynia Shipyard went bankrupt and had to be closed down in 2009. Its infrastructure is still used by several minor private companies which produce and repair ships and offshore installations for the global market and according to new, previously unknown, economic and social rules. 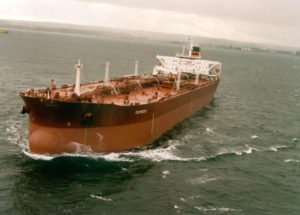 Our research project focuses on the last three decades of the Gdynia Shipyard’s existence and aims to explore biographical perspectives on all these external, structural, economic and political changes. To grasp these various perspectives and human experiences “from below”, we are conducting interviews with workers, technicians and engineers who worked in the shipyard for several decades. Their personal stories are treated as equally important – if not privileged – sources for our research questions. There is no other shipyard in Poland that offers insight into these combination of biographical-professional longue durée with multilayered, turbulent structural transformations “from above”.