The project is based on the comparative exploration of two case studies: the Uljanik shipyard in Pula (Croatia) and the Stocznia Gdynia shipyard in the Polish town of Gdynia. Both were (and in the Croatian case, continues to be) important industrial enterprises, employing at their peak thousands of workers. Both have a long and turbulent history: “Uljanik” was established in 1856 and the Gdynia shipyard in 1922. Thus, their histories have been shaped not only by economic business cycles but also by the histories of their locations. These are, among others, determined by their borderland positions and the repeated changes of the political-economic order during the 20th century. 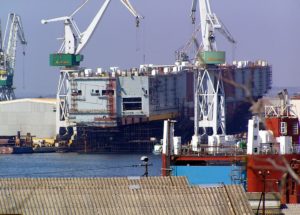 In the project, we focus on the period since the late 1970s/early 1980s, that is, late socialism and post-socialist transformation. The “thick” description of two case studies and the analysis of the practices of relevant historical actors on different levels of social action will result in a multi-dimensional comparison. The case-study approach allows the revealing of important minutiae of social change, which, in total, makes up large scale transformation. It also makes it possible to trace the importance of different contexts, in the sense of arenas of social interaction and communication, as well as influential external factors, without losing sight of the significance of place.