Uljanik is one of the oldest, continuously producing industrial enterprises in South-Eastern Europe. It has shown remarkable resilience despite being located in a place which has experienced frequent political ruptures. Since its foundation in 1856, the Istrian town of Pula, where the shipyard is situated, saw states coming and going: it was Austrian until 1918, Italian until 1943, under German occupation until 1945, under Allied control for two years, part of socialist Yugoslavia from 1947 to 1991, and finally of independent Croatia since 1991. These changes in the political framework substantially influenced the business of the shipyard; the last major change came in 2014, when Croatia joined the EU and became subject to the specific rules of the Union for state subsidies. 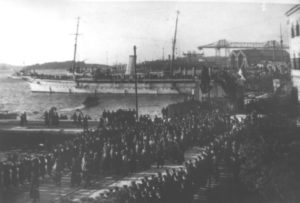 The shipyard was established in 1856 as part of Austria’s effort to turn the small town of Pula with its perfect natural harbor into the main naval arsenal of the monarchy. The first ship built in the new shipyard, the sailing boat Kaiser, was launched in 1858. During the next decades, mainly warships were built, including submarines during World War One. The expansion of the arsenal’s work as well as of the port of Pula contributed greatly to the rapid increase of the population of the town from around 1,100 in the early 1840s to almost 60,000 on the eve of World War One. 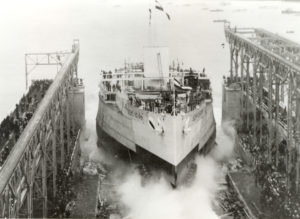 The interwar period, when Istria belonged to Italy, was a time of crisis for the shipyard, now called “Cantiere Navale Scoglio Olivi”. The shipyard could not compete with the large Italian ones and did not manage to win any tender by the Italian state for its marine. The number of workers declined substantially, oscillating between 150 and 800 throughout the interwar period. Scoglio Olivi did not build ships and was forced to concentrate on repair works and the dismantling of decommissioned ships. Archival reports point to a high degree of dissatisfaction among the remaining workforce, and also among the population of Pula at large because the Italian state failed to integrate its new periphery into its economic fabric. During the Second World War, work at the shipyard increased, because it did maintenance work for the Italian navy and produced oxygen for Italian, and later German submarines. This made it a target for Allied bombardments which destroyed much of its equipment.

After the end of the Second World War and the eventual inclusion of Pula into Yugoslavia, the shipyard quickly revived. The government invested substantial sums first in the reconstruction and then expansion of its production capacity. Yugoslavia’s opening to world markets in the 1950s provided new business opportunities; the introduction of workers’ management in the early 1950s (Uljanik was among the pioneer enterprises where it was first introduced) helped to build a coalition of workers and managers and to keep the party at bay. The delivery of the tanker “Al Mokattan” to Egypt in 1958 marked a watershed moment: since then, international costumers became increasingly important. Uljanik managed to carve out a niche on the international market by producing tailor-made ships for the specific needs of their clients. From 1971 to 1985, only 3% of the built DWT was for the home market; 45% went 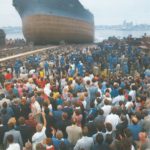 to developed countries, 32% to developing ones and 19% to flags of convenience. The largest ships assembled in Uljanik were oil tankers with up to 280,000 DWT.

By the mid-1980s, the number of workers reached almost 8,000, and Uljanik earned more than 150 million US-$ in export earnings every year. Yet, already in the second half of the 1980s, financial difficulties became increasingly evident, as a result of the general economic crisis in Yugoslavia. The dissolution of Yugoslavia in 1991, the ensuing war in Croatia (1991 to 1995) and the incoherent economic policies of the Croatian government greatly aggravated these problems. By the mid-1990s, Uljanik was facing bankruptcy. Workers went on strike a couple of times just to receive their salary.

Eventually, the state did not let down the enterprise, which since the early 1990s was state-owned. In 1997, a comprehensive restructuring program started, which solved the liquidity and debt problems of the shipyard. The government spent billions of kuna to help Uljanik become competitive again. Much of the core-workforce could be retained (but many workers in subsidiaries as well as temporary workers were laid off) and like during socialist times, Uljanik managed to carve out a niche on the global market thanks to specialization. Continuity in the position of director from the 1970s into the 2000s also helped; the management of the enterprise successfully rallied the support of the government by highlighting the symbolic and financial importance of their industry.

So, Uljanik’s survival and revival after the end of communist rule was largely determined by the state not leaving it on its own. Croatia’s accession to the European Union, therefore, presented another challenge because the subsidies, which the government provided to a company it owned, violated EU rules. The EU demanded that Croatian shipbuilding had to be privatized. The state sold most of its shares to workers and pensioners of Uljanik and pension funds. In this process, Uljanik took possession also of the Third of May shipyard in Rijeka (2013). 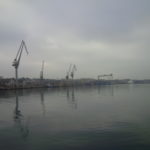 Today, the shipyard is doing relatively well, reporting profits. It thus represents a perfect case study for the exploration of business and labor relations through more than 150 years, and how these are connected with political change. It also shows how South-Eastern European societies and economies became integrated in global markets on the one hand, and how important the state is for the facilitation of globalization on the other. Here, there is a lot of room for productive comparisons, for example with (South) East Asia, where the main competitors of Uljanik are located.