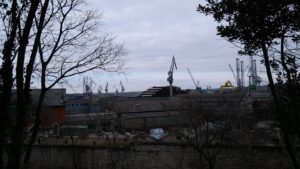 Upon arrival, the future of Uljanik was uncertain. A new “strategic partner” was being discussed, and the prospect of “restructuring”, with many workers fearing for their jobs. In this climate, the current management did not permit me open access to the shipyard. 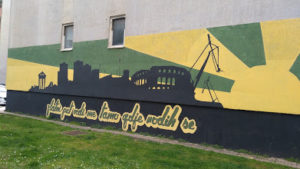 I refocused my project emphasis, following micro-work practices exclusively through interviews. Ethngraphically, I examined the role Uljanik plays in shaping social relations in the city of Pula, including its wider roles in shaping subcultures and sport. The shipyard´s cranes in the city skyline were often viewed as an intrinsic part of the city´s “identity”, as the above photo depicts. 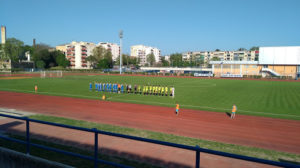 I also followed the activities of Workers´ Sports´ Societies directly connected with, and funded by Uljanik. This included the activities of Uljanik Standard, the football club, and the Uljanik Stadium – sold to the City Authorities at the start of the year.Through working alongside the local football fan group “Demoni”, I came into contact with many Uljanik workers, approaching the topic obliquely given the lack of direct access. 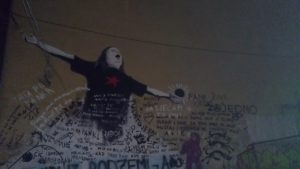 I considered the local punk scene and its connections with Uljanik. Three artists from the famous Yugoslav punk band Kud Idijoti worked at Uljanik, included the trade union activist Tusta (above) who died of lung cancer in 2012. I interviewed the lead singer. 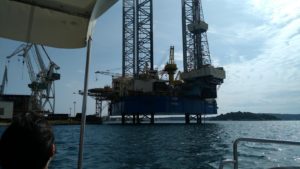 I had the opportunity to experience Uljanik from the harbour, on a tour looking at the various parts of the shipyard, including the “Otok”, “Sahara” and the various platforms. 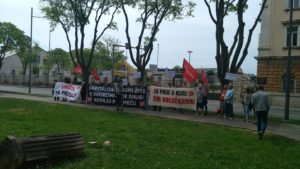 Given the workers´ unrest, I followed the activities of political actors protesting against the planned direction of “restructuring”. The strategic partner chosen, Danko Koncar, also owned a series of luxury hotels in Pula, and this was perceived as a conflict of interest. I followed the left-wing “Radnička fronta”, the “populist” Živi zid, and a group of self-organized Uljanik workers (Stožer za obranu Uljanika). I interviewed several of these actors and the trade unionists, and attended some political meetings on the future of the Uljanik shipyard.